from an ancient recipe to an industrial group

When does our story begin? When an unknown monk from Ischia, in the second half of the eighteenth century, selected the herbs and roots to make the original Amaro di Ischia recipe? Or when the colas in San Giuseppe Vesuviano started making liqueurs in 1920? Or when Arcangelo Cola devoted himself body and soul to the search for this recipe and, having found it, wanted to enhance it by creating a Liquor, a Brand, a Company, a system of Values ​​on it? However, it is an exciting story …

Since 1920 the Cola family, in San Giuseppe Vesuviano, has been manufacturing the typical liqueurs of Naples. Nocillo, Anisetta, Limoncello, Cordiale… are just some of the specialties that are produced in their laboratory and sold throughout Campania. The colas, however, keep for themselves, and for a few friends, one of the most particular products, a herbal amaro, inspired by a recipe from Ischia. The Amaro d’erbe di Ischia recipe dates back to the second half of the eighteenth century, developed by a Franciscan monk. The Friars Minor, present on the island since 1225, are skilled liquorists and Amaro is one of their specialties. However, years have passed and the original recipe is no longer known, perhaps lost when the friars, by order of the French government which then controlled the kingdom of Naples, were forced to leave their convent. The versions of “amaro di Ischia” present are sometimes very different from each other. One of the colas, Arcangelo, of the second generation of Vesuvian liquorists, is fascinated by the extraordinary story of the recipe of the friars of Ischia, their ability with stills and herb infusions. His dream is to recover the original formulation. Years later, he confessed to having spent more than a sleepless night in an attempt to reconcile the most accredited variations of recipes with the herbs and spices actually available in Ischia, at the end of the eighteenth century.

However, it was only at the end of the 1960s that Arcangelo Cola, determined to spread the amaro to the general public as well, dedicated his soul and body to the search for the original recipe. Studies in libraries, trips to ancient monasteries, passionate comparisons with expert liquorists, and real strokes of luck, finally allow him to recover the ancient formulation of the bitter liquor of an Ischian monk, the authentic one, the original handed down over the years without undergo changes. The result is surprising, an Amaro that preserves the aromas and flavors of the island, reconciling the astringent, bitter aftertaste, typical of herbal bitters, with a certain sweetness that does not displease even the most demanding palates.

At that moment the AMARISCHIA was born, the bitter enough! So convinced of the success of the recovery of the ancient product that Arcangelo Cola decides to give this name not only to the liqueur, but also to the same company he founded with the purpose, the mission we would say today, of producing and distributing the extraordinary bitter. A choice that communicates to employees, suppliers and customers, painstakingly takes care of all details, oversees all processes, from the selection of aromas to bottling and canning, ensuring fidelity to the formulation, the originality of the design of the bottle is the result of a month of selections, choices and second thoughts. Above all, he pretends that we expect a simple dictate: quality of ingredients, fidelity to the recipe.

The success of Amarischia: the trademark is immediately Brand!

The intuition of Amaro enough is a success: Amarischia is liked as a coffee killer and as an aperitif, it meets the taste of the Neapolitans establishing itself as the Amaro of Naples. In a few years, Amaro became appreciated in Campania and throughout the Italian peninsula.

Hence the transition to international markets is short. Abroad it is a well-known product. Tourists visiting Ischia spread its fame and taste, where Amarischia becomes the most consumed alcoholic product. For Neapolitan emigrants, visiting Naples, taking a few bottles home, for relatives and friends, is an obligation, they “must” have with them a taste and a scent that reminds everyone of their native land.

A communication campaign spreads the fame of the particular taste of Amarischia in Italy and abroad. The slogan “Bitter enough!”, At the base of the TV campaign of the late 70s and early 80s, is a catchphrase that has remained imprinted even on those who, in those years, were still not old enough to consume alcohol!

In 1973 the company strengthened its structures and diversified production by extending it to syrups and high quality almond sugared almonds.

“The garden of delights“, which marks fruit liqueurs such as Limoncello, creams of fruit liqueurs, amaretto, sambuca, dry liqueurs, bagnè for pastry and pure alcohol
“La Confetteria del Cuore”, premium brand for quality almond and chocolate confectionery.
Soon the family of spirits expands, products such as limoncello, nocillo, sambuca and anise, bathes, creams….
1999 the production expands: Hard Candies, Soft Candies and Chewing Gum
Indaco S.p.A. was founded in 1999, a company controlled by Amarischia, with the aim of expanding the product portfolio to candies and chewing gums.

The plant in Pascarola, in the province of Naples, founded by Alivar to produce these products, is acquired, with the Amarischia plant it acquires know-how, plants and relationships with leading industrial and commercial groups that with different brands will distribute the products nationally and internationally of Indaco.

The link with ISCHIA
The link with the island is strong, product distribution is particularly accurate, with dedicated resources, product communication, advertising, on Ischia, is specific. There is no shortage of sponsorships of local events. In Ischia, the Amaro amaro and the Amarischia sugared almonds are the favorites of the islanders who reciprocate the Cola’s passion for their island. 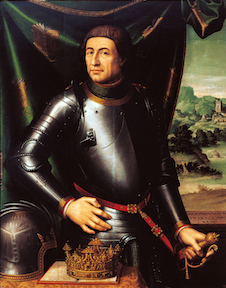 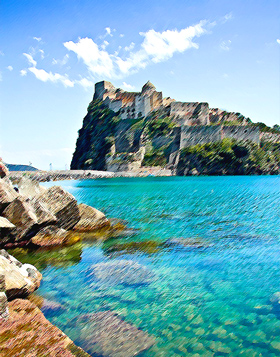 View of the Ischia Castle on the sea, photo retouching

The History of Amaro Amarischia

If you want more information on the history of Amaro Amarischia, if you are a student or a journalist or are simply curious, write to us, we will send you more information. 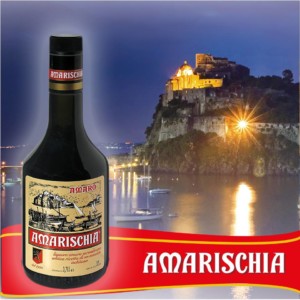